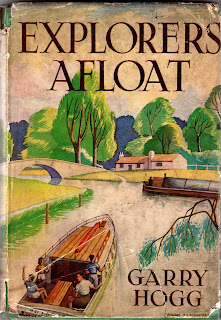 English canal literature from Victorian times on is littered with accounts of voyages made in craft from canoes  to narrow boats. Intrepid voyages along semi derelict waterways in dinghies, converted lifeboats and garden sheds mounted on pontoons were almost de-riguer. A spirit of adventure, a pioneering outlook coupled with a cheerful English insouciance were all that was required for the completion of a successful trip.

Between July and December 1939 Tom Rolt in 'Cressy' travelled the midland waterways and accomplished what was to become the most famous of all canal voyages. This trip has been chronicled elsewhere and many times so suffice it to say  that'Narrow Boat' the book resulting from this trip led to an interest in Britains neglected waterways which eventually saved them for posterity.

A couple of months prior to the start of Rolt's voyage, another canal trip took place which in its own unassuming way publicised canals to a section of the British public who were unlikely to read 'Narrow Boat' , namely children. Local boatmen and anyone visiting Nursers boatyard early in April 1939 would have noticed the unlikely sight of a 30ft, 6 berth, Thames Cabin cruiser tied up to the wharf. This boat the 'Venturer' was to be the boat used by an aspiring travel writer Garry Hogg to travel from Braunston down the Grand Union Canal and River Thames to Oxford.

Garry Hogg (1902 - 76) is best remembered as a schoolmaster and travel writer greatly interested in the English countryside with its customs and traditions, its country crafts and great houses etc. He is remembered now for his prolific output of books and also his radio broadcasts on these subjects throughout the 1940's and 50's but what is not so well known is the fact that he also wrote four books for children earlier in his career, two of which have waterway themes.

'Explorers Afloat' was published in July 1940 and was the third in his so called 'Explorers' series of childrens books and was a direct result of the Braunston - Oxford boat trip undertaken the previous year between the 14th - 27th April 1939. The book was a first in every sense.

Although many other books with waterway settings had been published prior to this e.g Arthur Ransome's famous series of books published in the 1930's usually set in the Lake District or Norfolk Broads; or Brian O'Farrell's 'Mystery on the River' of 1936 set on the Thames and most importantly Mark Harborough's book 'Fossil the Scout' 1933 which was almost certainly the first children's book since early Edwardian times to have an English canal setting. Garry Hogg's book was however quite different because it quite comprehensively dealt with canals and everything about canals. It was not just an adventure story with a canal setting. The canal was a subject for discussion in its own right!.

Ostensibly cast as an adventure story, the four fictional children in the book together with their uncle undertake to deliver a boat by canal to the Thames. As with most children's books at this time the characters are all impeccably middle class. Father works in town, Prep schools are the norm, servants abound, station porters on the local (now long vanished) rural branch line know the children intimately and address them as Master David etc as does the village postmistress.

Food and the provisioning of the boat seems to take an inordinate amount of time (a theme common to many children's adventure stories of the period, with a great deal of prominence being placed on Ginger Pop and Trifles and Jelly. Finally the adventure is allowed to begin after 'Agate' the chauffeur in "the long low Sunbeam car" deposits them on the Daventry road outside the entrance to the boatyard.

'Explorers afloat' is a strange book in that it is partly a fictional children's adventure story and partly a straightforward canal  travelogue. Real places and well known canal locations are mentioned, lock keepers dispense advice, boat and lock handling techniques are taught and the canal section takes up a good two thirds of the book.

The book is illustrated throughout with line drawings which give an added 'period' charm. Anyone interested in 'Art Deco' book illustration would appreciate this. Unfortunately however they don't give us much idea of the boat or its surroundings. Bruce Roberts the illustrator was well known for the posters he designed for London Transport in the mid 1950's so it is unfortunate to say the least that he appears not to have been inside the back cabin of the working boat he illustrates.

'Explorers Afloat' is an important book in the history of children's canal literature because apart from being one of the first books of the modern era to use canals as a setting it was the first 'how to do it' or 'do it yourself' book to appear on the subject. As with Malcolm Saville's children's books set on the canals of post war England (the first - Riddle of the Painted Box 1948), children are positively encouraged to get out and explore and discover for themselves. Adventures occur in the latter part of the book when their boat gets stuck on a weir and the children get trapped in a mill wheel. I wonder if these 'adventures' actually happened on the real voyage of preparation for the book or whether they were all a fiction. I suppose we will never know.

As the book is part of the 'Explorers' series it is well collected by children's book collectors who are interested in it for reasons other than its canal content so it is quite a hard book to find even though a second edition was published in 1952. The Publisher for those interested in such things was Nelson.

Bibliographic Note...- In the 1940 first edition of this book a frontispiece is called for in the list of illustrations but which does not seem to be included (At least in my copy). It is present in the 1952 second edition and as it is coloured I have a feeling that with the outbreak of war at the time of the 1st editions printing wartime, colour printing controls might explain its absence The two editions are pretty identical except that the First Ed has coloured maps inside the covers front and rear whereas the Second only has them at the rear. There are a couple of illustrations from the book in my other blog canalbookcollector2.blogspot.com go to Part 6 - Childrens books of the 1940's.
Posted by Unknown at 14:22