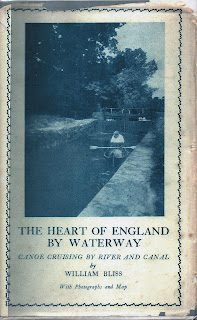 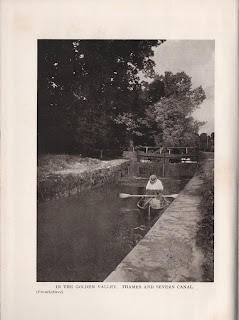 The gentleman who appears to be asleep sitting in his canoe in a lock on the Thames & Severn canal ,is one of my favourite canal writers. Actually I think he is probably reading or perhaps making notes for the book he is about to publish - 'The Heart Of England By Waterway'; a book that I have read many times for the sheer enjoyment of the quality of the writing.

The literature of the early years of British canal voyaging for pleasure is peppered with accounts of canoe cruises which for obvious reasons were the chosen means of voyaging through UK waterways in the latter half of the 19th century. In fact canoe touring enjoyed quite a vogue for many years after its initial popularization with the publication of the 'Rob Roy' series of books by John MacGregor. One such voyager and probably the most vociferous proponent of canoeing for pleasure during the 20th century was William Bliss.

His book whose full title is 'The Heart of England by Waterway - A canoeing chronicle by River & Canal' was published by Witherby in 1933. If you have got this far in reading this article and have decided that books on canoeing and canoeing technique are not your cup of tea then I beg you to persevere for there is little in the book on these subjects.
My copy of this book has a signed presentation note in the authors hand. The mame of the recipient has been erased but the inscription continues'......(to) a lover of England and of English Country from the author - who loves her too. William Bliss - 15 Nov 1933.'

This presentation dedication sums it up really - Bliss was a lover of the English countryside in general and of Canals and Waterways in particular.
The book is a delight to read because as I have said his descriptive prose is second to none. The man is obviously a romantic and what lover of waterways is not.His book is full of anecdotes and reminiscences from a long boating life written in a compelling and utterly charming way. The voyages in many instances took place over canals which are now derelict, so there is lots of contemporary interest here.

The author seems to have been born in the 1860's (I can find few references to him anywhere), so he must have been quite a young man when he canoed over derelict waterways like the Thames & Severn and Wilts & Berks canals. A flavour of the man is found in the first paragraph of the introductory chapter - 'One by One our English Canals are becoming derelict; each lustre sees another go. Once upon a time, not so very many years ago, it was possible to travel all over England, north, south, east and west, by river and canal; there was not a county you could not visit, hardly a town you could not reach by water, if you liked and if you were not (and what lover of boats and rivers ever was or will be?) in any particular hurry to get there.'  Again later in the same chapter he writes ' ........but these canals have long been derelict, and only here and there a line of sedge or a patch of golden iris or a tangle of alder or a row of willows, looking lost without the water at their knees, mark its course. They are going one by one, and I am writing thus about them before they go, so that anybody who reads and who has never yet experienced the peaceful beauty, the sleepy contentment that is peculiar to these English waterways, may do so before it is too late.' 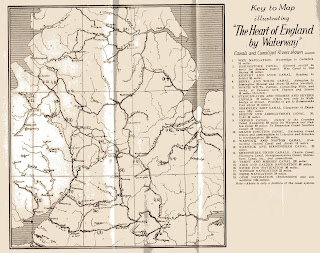 It sounds rather like the state of the canals when I first started boating! However the last paragraph quoted illustrates, I think, the fact that along with one or two earlier 20th century writers; Bliss was that rare thing at that time - a visionary for the possibility of canals for pleasure and recreation, although he does not preclude the possibilities of their resuscitation for trade.

I hope the couple of quotes already given illustrate the fact that we have a man of some sensibility here, and an educated man (References to Oxford University life are not uncommon) but its not all serious stuff, far from it. There are comic  (especially for 21st century eyes) moments in the book as for instance when voyaging up the Oxford canal he discovers a patch of white violets -' I had found Spring and would celebrate the discovery. I had provided for lunch , I remember, a fillet steak, cooked over-night and cold with bread and salt and a bottle of Burgundy.......'Sun and water and a Cotswold wind and beef and burgundy and white violets'........ I was thinking how well the scent of white violets blended with and enhanced the scent of burgundy (it was I remember, a Nuit St George, not the greatest of burgundies, but quite good enough for out-of-doors)...'  There are other comic references, as for instance when he encounters the bell ringers in the Red Lion at Cropredy. Some of the prose may be archaic to our eyes but it is of its time and class and as such, for me any way quite charming. 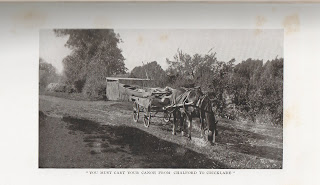 'You must cart your canoe from Chalford to Cricklade'

The book had but one edition and has never been republished as far as I know.The 9 chapters deal with the Thames above Oxford and Cotswold waters, River Severn, Gloucester & Berkely canal, Stroudwater canal, River Cherwell, Oxford canal, Warwick & Napton canal, River Avon, River Teme & Thames & Severn canal. There are three photographs and a folding map.

Its incredible to think that in his youth Bliss had canoed over the Wilts & Berks and Thames & Severn canals. It was whilst he was travelling on the latter and had camped at the mouth of Sapperton tunnel that he took a twilight walk and attracted by the heavy scent, found a huge patch of Butterfly orchids (now a very rare native plant).
I wonder if they are still there?

I have read many of William Bliss's books. He is a delightful if rather idiosyncratic writer. His book Canoeing has a beautiful descriptions of his journey through the Golden Valley on the Thames and Severn Canal when he made what must have been one of the last passages through Sapperton Tunnel. He inspired me to go canoeing on canals in my youth and I made a number of trips in his style along abandoned canals, notably the then derelict Rochdale Canal west from Sowerby Bridge across the Pennines. His book Rapid Rivers has a lovely story of his trip down the Wharf in Grayling, a home made canoe borrowed from a man in Ilkely.iblassi