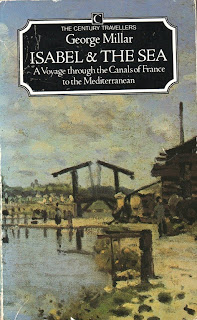 Paperback edition of ‘Isabel & the Sea’
Publisher- Century 1983.
A few years ago whilst selling books at a book fair in Penzance', I was approached by an obviously nautical ‘character’ and asked if I had a copy of Isabel & the Sea for sale. I had never heard of the book but eventually managed to find him a copy. The guy told me that he lived in Penzance during the winter and spent his summers exploring the Mediterranean in his boat after having sailed it over from England and down through the French waterways. He wanted a copy of Millar's book because the author had made the same journey through the French canals many years before but in vastly different circumstances. It was ,he said, ‘ one of the most entertaining accounts of travel through the French canals ever published’. My interests were aroused and I was not disappointed.
I suppose the unique character of the book lies in the extraordinary circumstances in which the journey took place, for Millar’s canal trip took place in the immediate aftermath of war torn Europe. There is as far as I know, no other book remotely like it. It seems to have everything – excitement, adventure and social reportage being just three elements in a book written by an acknowledged war hero.
The author had just published his war memoirs when at the age of 35 and in 1946 he bought an old Cornish lugger with the proceeds from the sale of his book. In June 1946 after some initial fitting out difficulties in the continuing wartime conditions of rationing and emergency laws he set sail for France with his wife who knew nothing about boats and suffered from constant sea sickness. He himself had sailed dinghy's as a child and had taught himself navigation whilst a prisoner of the Germans during the war.
Provisioning of the boat was accomplished with a cooked chicken, 6 lbs of strawberries and many cartons of cigarettes which they intended to barter for food on their journey.
Millar’s boat must have been one of the  first boats to attempt a journey through the French waterways after the war. The conditions were appalling! They made Le Havre safely only to find the harbour full of sunken wrecks and only a handful of houses left standing in the town. On their canal journey they were shocked by the half gutted villages and the general privations of the population. The book abounds with conversations with the locals and especially the working boat community. Common topics were the food shortages and the black market. Passing through the Canal de Loing, Briare , Loire lateral and Canal du Centre canals they were surprised at the amount of horse drawn boat traffic they encountered. Evidently this was as a result of the German requisitioning of all the ‘automoteurs’ during the war.
Encountering barges full of German prisoners he comments that the prisoners were not being treated very well by the French, in marked contrast to the treatment afforded to the prisoners in American hands they saw at Le Havre. Not unsurprising one would have thought considering the devastated landscape through which they were passing.
Difficulties in obtaining supplies,spare parts and fuel are all discussed in some detail. They visit famous people of the time including Somerset Maugham and Lord Beaverbrook. Millar is called to Paris for presentation of a war medal by General de Gaulle. On their arrival in Marseille they progress into the Med where ports of call include Antibes and San Remo. Every harbour is found bomb blasted and littered with wrecks. The journey through the canals occupies a large part of the book before they journey onto Italy and beyond.
One little incident serves to inform us of the constant reminders they had of the all too recent war. The wine that accompanies their meal in an Italian restaurant ‘comes with the compliments of the Wehrmacht’ their Italian waiter informs them with a wink.
Throughout the book the author gives occasional hints of his involvement in the war. When I researched further I found that he was in fact a well decorated war hero.George Millar  was a journalist living and working in Paris before the war. On the outbreak of war he returned to England and enlisted. He was captured in North Africa and sent to Italy. When Italy surrendered he was sent by the Germans to a POW camp in Germany and it was on this journey that he jumped from a train and started back across France where he encountered a POW escape line to Spain. After much hardship and many adventures he made it back to Britain where he was promptly enrolled as a secret agent and parachuted back into France. All of these exploits are described in his two books ‘Maquis’  and ‘Horned Pigeon’. For a fuller account of his life go to www.independent.co.uk/news/obituariesAfter the war he farmed in Dorset, sailed and wrote more books about his sailing adventures.
In the 1948 edition ,’Isabel and the Sea has a photograph of the Lugger as a frontispiece but no other illustrations.The book was reprinted by Century in 1983 as an unillustrated paperback.After the authors death in 2006 the Dovecote press published a hardback edition with 4 pages of photographs found at P Millar's home.
A really great read.
Posted by Unknown at 13:32