Engraving of the week . 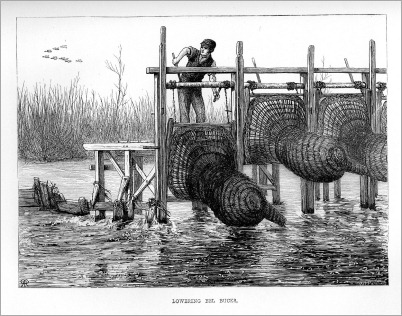 Eels once formed part of the basic diet of many riverside communities and they were beloved by Londons East Enders along with cockles and whelks.

The eel buck was peculiar to the Thames although eel fishing was practiced on many other English rivers. The wicker basket was made locally from willow harvested from the rivers banks and was then mounted on a wooden framework where it could be raised and lowered into the water.

There are many accounts of its hindrance to navigation and the buck is perpetuated in the names of a couple of islands - Buck Eyot and Handbuck Eyot  one near Shiplake and the other near Marsh Lock.

The Eel Buck passed out of use early in the last century and this could partly be due to an increase in living standards as the eel had always been considered as a food of the poor. Today with the stocks of eels being said to have declined by up to 95% the species is strictly protected. Environmental  factors, overfishing and global warming are said to be some of the reasons for this catastrophic decline although the presence of high levels of industrial chemicals in the fish could also be another potent reason for its scarcity. 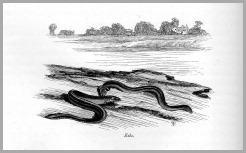 Thanks so much for this engraving and essay! It was just what I needed for a limerick. http://www.oedilf.com/db/Lim.php?VerseId=376290