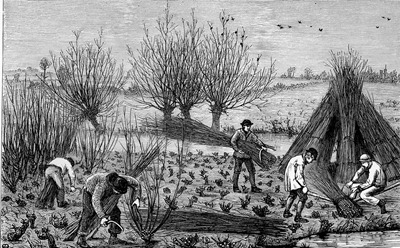 Osier Cutting  from 'Life on the Upper Thames ' by H R Robinson 1875.
Robinson tells us that the term osier is applied to the various species of willow used in basket making and that these species can be differentiated from other willow species by the fact that osiers have their leaves opposite each other on the stem or 'rod'. The beds of osiers were called holts or hams and in the late 19th century about 7,000 acres were under cultivation.
The rods were harvested in March and after cutting were separated into different sizes and sorts with the strange and archaic names of Luke, Threepenny, Middleborough, and Great. A bundle of willow rods was called a bolt and was formed using two pieces of wood to hold the rods while being tied or 'winched'  into a bolt. In Robinsons time there were said to be over 300 different sorts and colours of osiers in cultivation.
Happily basket making in the UK is still alive and well but supplies of English willow now mainly come from the Somerset levels.

Hello there Mick.
I wonder if you could remind me of the title of a 'canal type' book with the word '...Mayflower' in it?

Hello Juerdy.
Cant think of anything with that name to do with canal books.Try 'Mayflower' as a keyword at www.bookfinder.com.