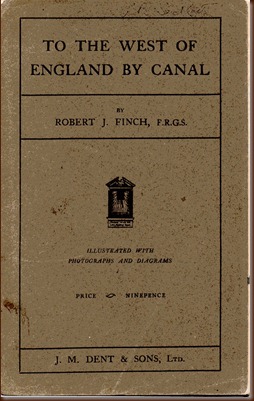 Those who like myself love and collect old waterway books will be pleased to see that Steve Parkin has decided to find out a little more about one of our earlier UK Canal book authors. I had been gratified but a little perplexed as to why an earlier blog of mine ‘ A Forgotten book from the 1930’s’  published in Nov 2010 had been getting a lot of recent hits. Turning to Steve’s blog http://nbalbert.blogspot.com I found that he had mentioned my site in the first of a series of articles he is writing about William Bliss who is one of that neglected band of early canal travel authors and about whom little has been published.
So I for one will be looking forward to reading the results of Steve’s researches. Thinking about these few early authors and turning to my own collection I remembered a thin paper back published in 1912 which was probably the first ‘canal travel’ book in the 20th C to be illustrated using photographs although I have seen magazine articles from c1906 using photographs to illustrate accounts of canal voyaging. 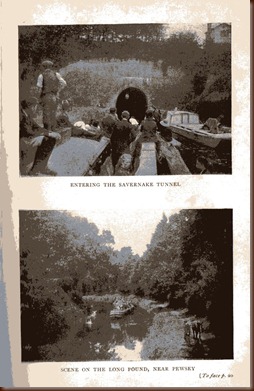 ‘To the West of England by Canal’  by Robert J Finch was published as a small thin paperback in 1912 by the school text book publishers J M Dent & sons in their ‘Educational Journeys’ series of books intended for teachers leading school educational visits to places of interest etc. The author seems to have been the senior Geography master at Hornsey County school who had led a party of senior children from his school each year from 1907 – 1911 on journeys along the Kennet & Avon Canal. So it seems that school outings & educational visits/holidays are not just a part of a modern school curriculam at all and indeed judging by this evidence they seem to have been an established facit of school life at the turn of the 20th C. Certainly I have not come across any other evidence before this time of canal travel by schools and Finch’s annual trips on the K&A are pioneering in this respect. 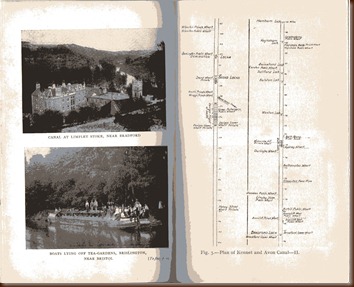 Pioneering too was the authors use of camping boats i e narrow boats. The party was large with 60 children travelling and sleeping in hammocks on 2 boats.
The book is primarily a guide to the local sights –literary,archaeological,historical topographical that might be visited from the canal which the author states ‘ is practically disused for commercial traffic’. The preface contains hints and tips for camping on boats and this is followed by a history of the K&A and canals in general. Strip maps of the canal accompany the text throughout.
I have illustrated the most interesting of the pioneering  photographs. I particularly like the top one which shows a pair of the camping boats breasted up at the entrance to the Savernake tunnel . I wonder whether they went through it still breasted?
The bottom photograph shows the boats again breasted up outside the famous tea gardens at Brislington on the Bristol Avon (which amazingly are still there & in themselves must constitute some record for longevity). The boat on the inside of this picture seems to have a conversion or at least a hard top as does one of the boats in the tunnel picture. Both boats have bow cabins.
Looking at these photographs taken so long ago I wondered how many of the young men probably of sixth form age that can be seen in various poses about the boats would return from the carnage of a war that in a couple of years would break out in Europe.!!
A rare little book & I have only ever seen the one. I can find no copies for sale on the internet.
Next time I hope to show the earliest English canal voyage illustrated by photographs that I have in my collection and in future articles talk about other early forgotten canal voyagers.
Posted by Unknown at 02:59