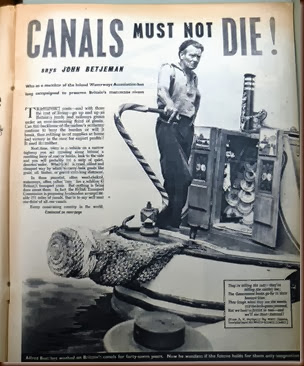 In the mid 1950’s the British Transport Commission were trying to abandon over 700 miles of the canal network including some of todays most popular canals e.g the Oxford & Peak Forest canals. The IWA were of course opposed to this and Sir John Betjeman, Britain’s most popular poet & a member of this organization published the above article in September 1955.

Interestingly the photographs caption reads ‘ Alfred Best has worked on Britain’s canals for  forty – seven years. Now he wonders if the future holds for them only stagnation.’

Myself and many others of a certain age will remember Alf Best on the local B W maintenance gang at Braunston and later he could often be seen in his retirement around the village.