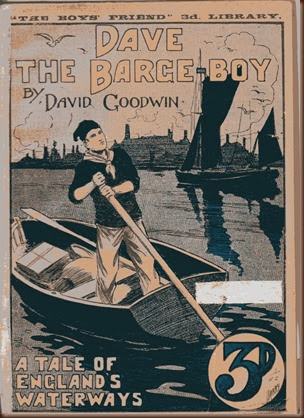 One of the downsides to collecting old books is their often poor and tatty condition. So trying to obtain replacements which will have – a dust wrapper that isn’t torn or defaced, pages or illustrations that are not grubby or missing or better still (for diehard collectors)a copy that has been signed by the author can be a thankless task. Often, with the oldest & rarest books, this can take some time and sometimes is next to impossible. This is especially so with children's books ( Some of you may already be starting to yawn here). However as I have said before I make no apologies for collecting kids canal books as often ideas and even prejudices are formed when young minds and reading matter meet.

Discovering a book that you have never seen or heard of before and that isn’t mentioned in any canal bibliography is quite exciting. But to discover TWO such is for me at least, quite unparalleled.! 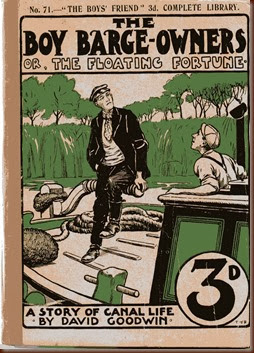 The Boy Barge Owners and Dave the Barge Boy were written by Sidney Floyd Gowing under the pseudonym David Goodwin and published in The Boys Friend Library series of pocket size books published by Amalgamated Press. The series ran from 1906 to 1940 when it ceased publication due to the German invasion of Norway and a consequent shortage of woodpulp & paper. This library series had many famous author contributors (W E Johns of Biggles fame for example) and was mostly reprints of stories that had been issued in earlier boys comics in the Amalgamated Presses stable from 1895 on e g  - Magnet,Boys Friend,Robin Hood &Hotspur.

This was true for both these 1909 & 1910 books which had previously been published in The Boys Friend comic in 1903. This makes them some of the earliest children’s canal adventure stories to be published in the UK and with their coloured period illustrated paper wrappers,seem to be, quite unique. I can think of only one earlier book and this was Aboard the Atlanta a full length hardback novel published in 1877.

The stories ….. As might be expected the stories are typically of the Edwardian schoolboy ‘Spiffing Yarn’ variety. ‘Dave the Barge Boy’  is set at Ware in Hertfordshire before progressing down the Lee Navigation and Bow Creek. The locations are authentically described as are descriptions of the boat and navigational details. Exciting adventures involving a lost inheritance and unscrupulous aristocrats are enjoyed before the Thames barge voyages up some of the east coast rivers.

Similar themes are found in ‘The Boy Barge Owners’  but the author seems to have lost the plot a bit in terms of locations and topographical details. The barge is described as being a flat bottomed craft which again travels the Thames and East coast rivers & creeks as well as making occasional forays to the inland waterways of Holland & Belgium. A trip up ‘the canal’ to Bristol is also thrown in for good measure. Some place names are real enough whilst others are invented and the latter day reader is left wondering quite what kind of craft could have made the journeys described.

A final note – There may be more of these early children’s stories out there  so if you know of any I would love to hear of them.