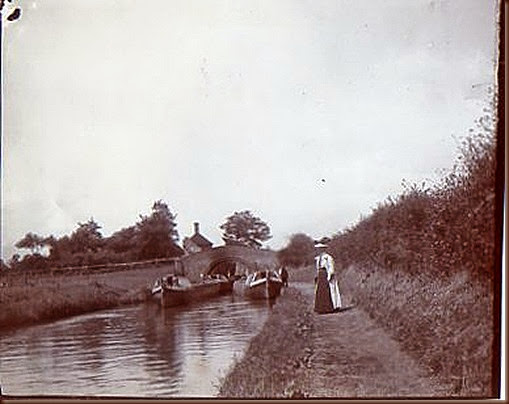 I wonder if any of my readers can help in identifying the location of these early photographs. They come from a collection of views taken I think in the 1880 – 90 period in the Oxfordshire area. They are almost certainly of the Oxford Canal and show three boats in the above picture waiting to enter a lock which I think  is probably Cropredy bottom lock. 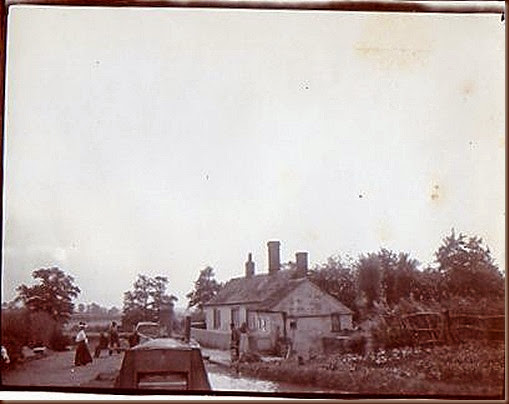 I think we can be fairly sure that both photographs were taken on the same day as the same lady onlooker appears in the scenes. I rather think that the Cropredy? view was perhaps taken first and as the boats are working uphill that the second view was taken somewhere on the Claydon flight. However the puzzle is – the lockhouse  cottage - as I cannot think of a single story lock cottage anywhere on this canal. The only other building on this flight is the maintenance yard at the top of Claydon whose buildings bear no resemblance to the one shown here.

Of course my placing of the scene in the Cropredy/Claydon area is pure conjecture and  it could be anywhere on the canal. As far as I can remember all the surviving lock cottages on the canal are double story and so the building in the photo could have been demolished. There was for example a cottage at Shipton Weir lock which was demolished within living memory.

The photographer & lady friend may have walked up the towpath from Cropredy following the boats to the next lock Broadmoor – was there a now long vanished single story cottage here???  Please leave a comment or conjecture if you have any ideas as I am totally puzzled.

The second photo is of Grant's Lock 30 on the Oxford Canal. The main building is now two storey, but the northern extension (nearest the camera) is still single storey, with the guttering and drainpipe still there. I presume the main building has been extended upwards at some time.

The first photo could be a choice of three locks - the bridge arch and details are wrong to be any others. It could be, in my order of guessing,
King's Sutton Lock 31
Grant's Lock 30
Claydon Middle Lock 19

Email paul@waterayroutes.co.uk if you would like a photo or two to help identify these.