The Canal Woodcuts of John O’Connor. 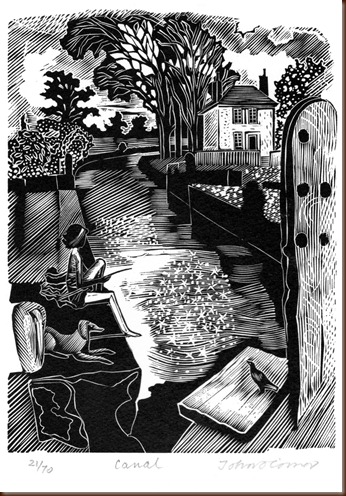 ‘Canal’ by John O’Connor. Woodcut. No21 from an edition of 70. (Authors collection)

The year 1950 saw four important waterway books published, all now well established as classics .They were ‘The Inland Waterways of England’ by Tom Rolt, ‘The Canals of England’  by Eric De Mare, ‘British Canals’ by Charles Hadfield and probably the least known of the four ‘Canals Barges and People’  by John O’Connor. As Mark Baldwin says in his ‘Canal Books’  (1984) ‘we can look upon 1950 as the dawn of a new canal age in publishing’. 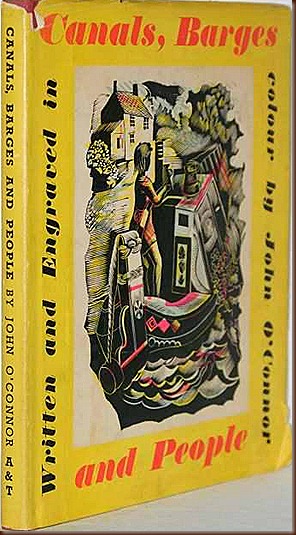 Its very interesting that of the four authors mentioned above; one was a historian (Hadfield) ,one an  engineer (Rolt) and two artists – De Mare (Photographer) and O’Connor (Artist & Wood Engraver).
They were too, all firsts in their way – Charles Hadfield was the first canal historian of the modern post war period, Tom Rolt as is well known, initiated a public awareness in our countries canal heritage , Eric De Mare produced some of the finest photographs of canal subjects which in many peoples eyes have never been bettered and the same could be said for John O'Connor's woodcuts. 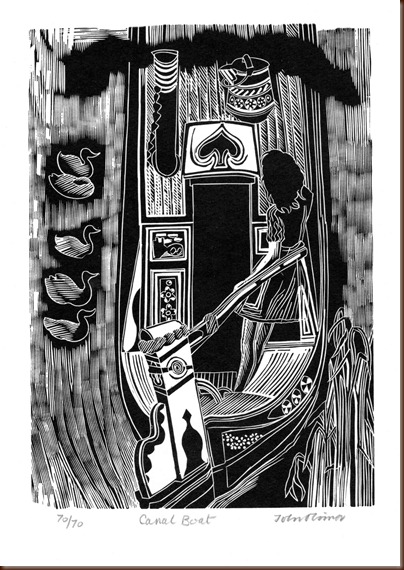 ‘Canal Boat’  by John O’Connor. Woodcut. No 70 from an edition of 70. (Authors Collection)

Canals and the canal boat people were a favourite subject for O’Connor and in the late 1940’s he depicted many such subjects on the southern Grand Union including a visit to the boat dock at Uxbridge. In his book he records his conversations with the boat people but it is his wood engravings that are the primary joy of the book.
He was innovative too in his use of colour overprinting with lino cuts which were applied over the top of the black & white wood engraving. This can be seen on the cover of his book ‘Canals Barges and People’ This is full of his woodcuts and was published in an edition of only 1,000 and due to technical problems was never reprinted. This together with the fact that the book has been broken by print dealers and is also collected by those interested in wood engraving has over the years resulted in a scarcity and steadily rising prices.
John O’Connor was a fine artist and master wood engraver and was taught by Eric Ravelious. If you want to know more about his life, influences and work try Wikipaedia or the Guardian or Independent obituary archives. John O’Connor died in 2004.
You may have come across a copy of one of the earliest pleasure cruising guides produced by British Waterways in the mid 1950’s. 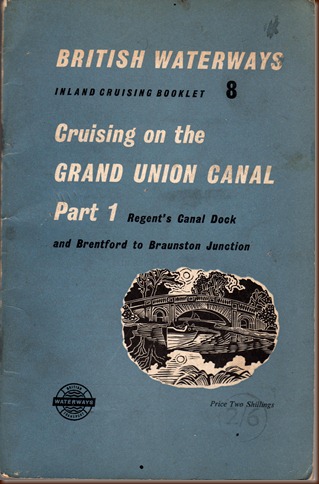 The front cover of the earliest editions has a small woodcut vignette which  I think was designed by O’Connor and I reproduce one of these below. The later editions of these cruising guides had the woodcut replaced by a photograph. 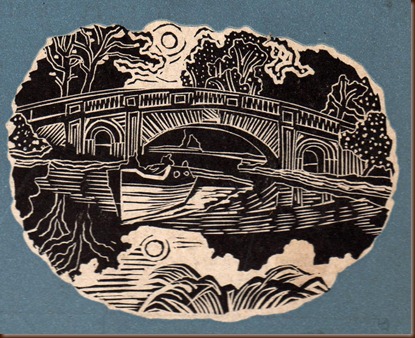 John O’Connor can be included in that loose collection of British artists,designers,architects and photographers who from the mid 1940’s were the first to show an interest in Narrow Boat Decoration as part of a larger British Folk Art Scene. Following Noel Carrington, Enid Marx, Margaret Lambert, Barbera Jones and Eric De Mare; John O’Connor was one of the last  but by no means the least to have his contribution published in 1950.
It is unique and has never been bettered!!
In more recent times Tony Lewery has continued this interest in his books – Narrow Boat Painting & Flowers Afloat.
I hope to blog at some stage on these artist designers and their interest in British Folk Art and on the way in which they focussed attention on British canal boat decoration after the war.
Posted by Unknown at 06:03