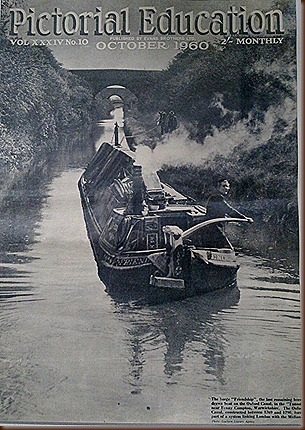 Boaters who were young in the 1960’s may remember Joe and Rose Skinner,their boat ‘Friendship’  and their motive power – Dolly the mule. Joe was a gentleman of the old school and a connection to times long past. When in retirement at Suttons Stop he was a regular attender at boat rallies and the like and it was at one of these that I first came across him.

The cover photo of the magazine above hasn’t reproduced very well so apologies for that but it is an unusual shot that not many of you will have seen. Joe can just be seen behind Dolly on the towpath.

The shot was taken from a bridge over the ‘tunnel’ at Fenny Compton on the Oxford Canal and shows the boat on what must have been one of their last trips.

If you want to know more about Joe & Rose then ‘The Last Number Ones’ edited by Hugh Potter is the book for you. Or for a personal anecdote on Joe I can do no better than recommend an article by Tony Lewery who like me fell in love with the cut, its characters, its boats and its art in the 60’s http://www.canaljunction.com/mainline/0803.htm

The Skinners and their life are also mentioned in the Guardian obituary of Jack Skinner,a nephew of Joes and himself a living legend. Jack died in 2008 at the age of 88 and details of his life and of how he saved the Oxford canal (twice) can be found at http://www.guardian.co.uk/theguardian/2008/jun/16/1