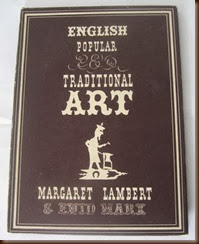 Published 1946.
It is to another artist however that we owe the honour of being the first to describe the ‘rose & castle’ decoration of the narrow boats in detail. An article published in the ‘Architectural Review’ in the same year as Marx & Lamberts book contained 8 pages of a first hand detailed verbal description of boat decoration together with drawn illustrations by the artist Barbara Jones. 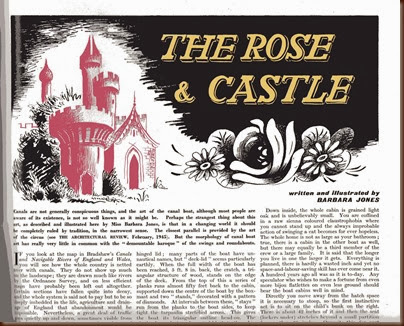 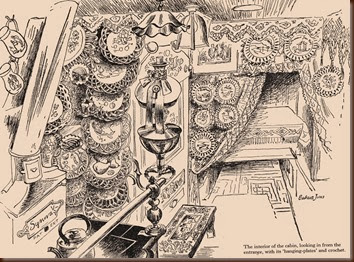 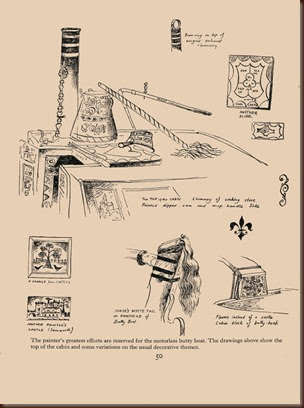 Cabin top, ‘ellum’ & rams head decoration by Barbara Jones.
This 1946 article was reprinted & given a chapter of its own in a more general survey of British Folk Arts by Barbara Jones entitled ‘The Unsophisticated Arts’  published in 1951. This covered such things as fairground art, tattoos,seaside art and all things humble & hand made by the working population. Barbara Jones remarks in her book that all these things were fast disappearing and that  she didn’t think that more than a handful would survive the next few years. It’s a fascinating book quirky and full of the most obscure information and it has recently been republished with a contribution from Peter Blake the artist. 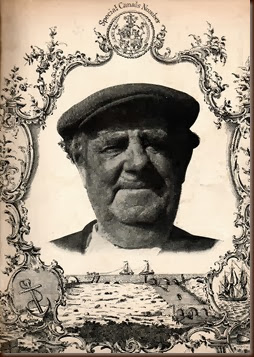 ‘Special Canals Number. The Architectural Review’  July 1949.
Well there he is – old Joe Hollinshead, retired boatman, staring out at us from the front cover of one of Britain's most prestigious professional magazines in July 1949. The whole magazine was ,most unusually for the time, devoted solely to Britain's canals – their history, development, present state and future. The article had been written by a freelance architect and photographer – Eric De Mare with the assistance of the newly formed Inland Waterways Association and in particular its members Tom Rolt of ‘Narrow Boat’  fame and Charles Hadfield (Canal Historian). 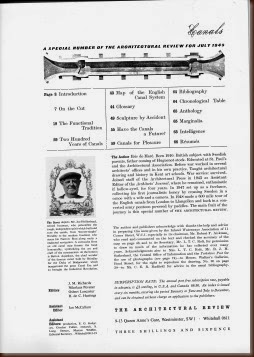 Title page of ‘Special Canals Number’ 1949.
De Mare also a member of the IWA had in the previous year (1948) completed a 600 mile journey along the canals in a converted ex army pontoon and as an accomplished photographer  had taken what have subsequently been acknowledged as some of the finest photographs ever taken of Britain's canal heritage & its architectural structures and  working population. 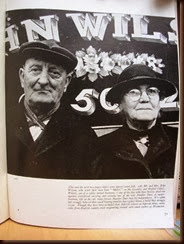 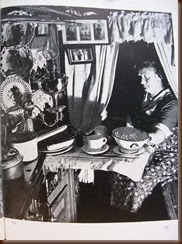 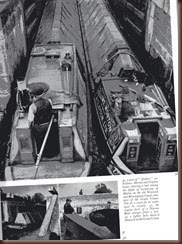 Eric de Mare’s photographs from ;The Canals of England’  First Edt’n 1950.
Like Barbara Jones article, Eric De Mare’s photographic essay was subsequently published in book form in 1950 under the title of ‘The Canals of England’. Justly acclaimed as one of the four pivotal books of the new canal age it has been through many editions and is I think still in print to this day.
After reading these two articles I wondered why was it that these two articles each producing notable and landmark books appeared suddenly after a period so long devoid of any interest in Inland Waterways.? The immediate answer would obviously seem to be, that in Eric De Mares case, his interest was kindled by his involvement in the early years of the IWA. This organization was in itself a product of two individuals interests. They were of course Tom Rolt & Robert Aickman..
In Tom Rolt’s case the publication of his classic and immediately  popular book ‘Narrow Boat’  had fuelled an interest in waterways & ultimately the emergence of a new leisure age for the  canals.
So how did ‘Narrow Boat’  come to be written ?. Was it just the product of one mans interest & obsession or were there other factors which influenced the production of this book ?  Was it just this one book that initiated a new canal age?
In my next blog I hope to deal with the wider social scene and the neo romantic movement which I think influenced the emergence of the books and articles discussed in this  blog.