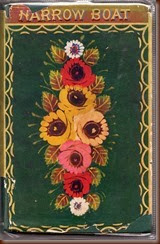 ‘Narrow Boat’  L T C Rolt. First Edition 1944.
Pride of place in any canal book collection should probably go to ‘Narrow Boat’  and even though my own battered first edition copy with a far from intact dust jacket is signed by him, I have to admit that it is not my favourite book. Even so, like most people, I do recognize its importance.
So how did this book that raised a new realisation that our canals still existed and which prompted the formation of an organization to protect and preserve canals and thus usher in a new canal age, come to be written? This new awareness produced too an ever increasing number of books and articles such as the two described in Part 1 of this blog – ‘The Rose & Castle’  by Barbara Jones and ‘The Canals of England’  by Eric De Mare.
Tom Rolt’s book appeared in 1944 and was an immediate popular success story. To a public weary of the war it offered an escape to an older more peaceful time and as such it seems to be part of a movement that had existed in Britain since the end of the First World war. 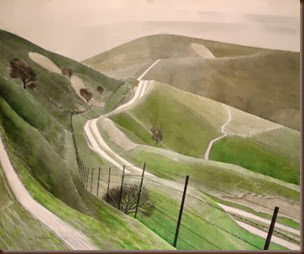 ‘Chalk Paths’  by Eric Ravelious. Watercolour on paper. 1935.
Neo  Romanticism –1930 –55.
The Depression years of the 1930’s saw a conscious movement in the arts away from the ugliness of the industrial revolution towards a simplified vision of a bygone era. The British Landscape as seen in the paintings of Eric Ravelious and John Piper for example shows a typically nostalgic and pastoral vision in simplified decorative terms. 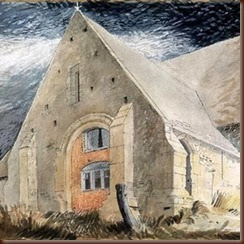 ‘Tithe Barn, Great Coxwell, Berkshire’  by John Piper.Watercolour.1940.
This new movement was not confined to painting but embraced most of the arts including literature, poetry, music, film and photography. At the same time and partially due to the depression years of the early 30’s there was an increased awareness of the Landscape and the countryside with its heritage and structures to be explored and enjoyed. Thus rambling became quite a vogue for a time to be especially enjoyed by those with no work & little money.
The uncertainties that the Great War and the depression unleashed, manifested themselves in an anxiety about increased urbanization and industrial development in some quarters and this was reflected in a nostalgic regret for the more simpler creations of the hand made and the artisan. 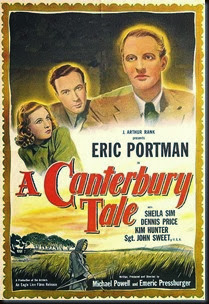 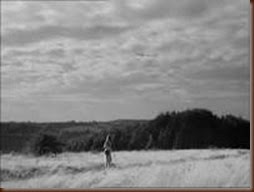 Promotion & Film still from ‘ A Canterbury Tale’ 1944.Directors-Michael Powell & Emeric Pressburger.
‘What are we fighting for’ ?
With the arrival of war in 1939 and the threat to Britain’s very existence in question, the government sought to boost national morale with a series of propaganda films such as ‘A Canterbury Tale’ . These tended to celebrate positive virtues in the English character – stoicism,liberalism etc. and especially an identification with the English pastoral landscape. Thus the English village, its lore and its characters were portrayed in a very romantic manner and in a setting that had remained relatively unchanged for centuries.
‘Recording Britain’   (1940 – 45.)
In tandem with the war time propaganda films the Government also sought to boost morale by employing artists to record and celebrate the country’s natural beauty and architectural heritage. This resulted in over 1500 paintings and drawings which sought to preserve the English landscape under threat from invasion or from ‘progress’ –development and road building etc. Rural industries under decline and their disappearing craftsmen found especial favour. So it is no coincidence that Barbara Jones was employed on this scheme and that her interest in everything quirky & esoteric in English working class art ,no matter how humble, should eventually find her drawn to the decoration of the Narrow Boats and thus the production of her article in the 1946 ‘Architectural Review’. 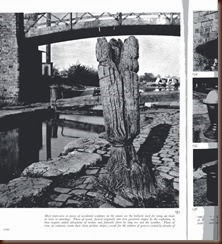 Function & form. Eric de Mare’s photograph from ‘The Canals of England’ 1950.
Eric de Mares photographs are justly celebrated as being some of the finest ever taken of Britain’s canals. They were the first to celebrate the function and form of the canals in an artistic and professional way. They are above all, romantic and extremely nostalgic and fit the neo romantic profile perfectly.
Tom Rolt
I have tried to show how a backward look to a peaceful pastoral past, craftsmen, the handmade, ruralism and a love of country were all qualities craved for in an era dominated by the depression and the threat of war. These qualities were possessed in full by Tom Rolt and articulated in his book ‘Narrow Boat’  published in 1944. A complex character - Rolt was a strange mixture of Engineer,Philosopher and Romantic. In his writings,amongst other things, he decries industrialization and its soul destroying effects on the worker and looks back and praises the artisan and the hand made and in doing this he was yet another voice in a a chorus of others who had been saying much the same thing in the years before the war.
When I first ‘discovered’ the canal world in the mid 60’s I like many others was smitten and wanting to know more, discovered that there were few books available for enlightenment. ‘Narrow Boat’ having been in more or less continual publication since it was first issued was one of the few available and again like many others was struck by the authenticity of the authors voice and the strength and passion of his thoughts.So consequently I had tended to think that Rolt’s book  was the lone voice of a man who had discovered and fallen in love with the canal world and who wanted above all to preserve the indigenous way of life that he found there. This was the impression that I had and is the impression that is commonly given to this day. So it wasn’t until I had collected a few of the older books on the subject and become aware of the social background and artistic movements of Britain in the years before the war that I began to realise how much the germination of Tom Rolt’s ideas depended on the ‘times’ & it seemed to me that they were just part of a social,philosophical and artistic movement found in pre war England.
All the early canal voyagers – Aubertin, Bonthron, Thurston,Neale etc. were praising the virtues of the canals for leisure and pleasure use from the first world war period on, and by 1933 , William Bliss in his ‘The Heart of England by Waterway’  was adding the warning that they were fast disappearing.However the time wasn’t  ripe for the message to be listened to and it wasn’t until Narrow boat with Rolt’s message of a way of life that was under threat was published during the war that the message had a positive popular public response.  As I have shown, It was at this time too that Barbara Jones was becoming interested in the folk art of the canals.
So the message might not have been quite as original or as new as we are led to believe but that it was immediately and popularly successful there can be no doubt ( the first edition in October 1944 sold out by Christmas and was immediately reprinted in January 1945). Tom Rolt had written ‘Narrow Boat’  several years before but had failed to find a publisher but after several years of war it was a different story.
Tom Rolt, it seems, was the right man with the right message at the right time.
Posted by Unknown at 07:16