‘Bibliography of British Canals 1623-1950’ by Mark Baldwin and some recent finds.


Mark Baldwin’s bibliography has been an indispensible guide to many collectors of English waterway literature ever since its publication in 1984. It is I think the most comprehensive survey of English waterway books published from the earliest times up until the start of ‘the new canal age’ in 1950. 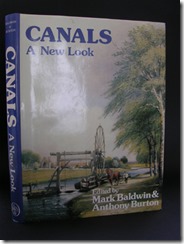 It was contained within the book ‘ Canals A New Look’  and as far as I know has never been published elswhere. Also and as a bonus it contains a separate Bibliography of European Cruising 1833-1939  as well as a ‘Bibliography of Charles Hadfield’s published work’. So there you have it -  all the reference sources you need as well as other interesting articles in one volume. No excuses for not owning one either,as it is easily available on the secondhand market for as little as £3 or £4.

In my years of book collecting I have come across several books  or editions of books which are not mentioned in the bibliography and I can only imagine that Mark chose not to include them for some reason or, and this is I feel more likely - was unaware of their existence at the time of his compilation.
So for the benefit of other collectors who may not know them either, I list them below and roughly in the categories that were used by Mark Baldwin. They are nearly all fictional works published before 1950.
Fictional works inspired by George Smith (The so called ‘Moral Tales).

Details & photos of most of these books can be found in canalbookcollector2.blogspot.com or in my main blog. If you are looking for any of these or any other books try - BookFinder.com
Posted by Unknown at 08:17