Happy Christmas to all my readers! 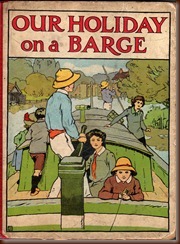 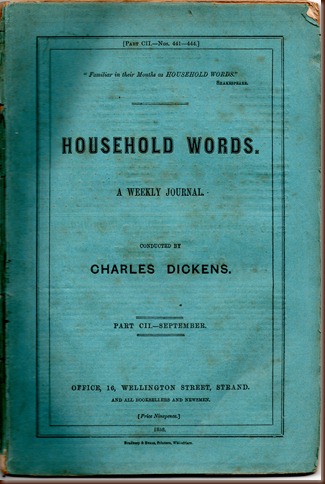 ‘Household Words ‘  1858.
Up early on this very frosty morning just as dawn was breaking over the top of the towpath hedge next to my mooring. Two dark shapes moving behind the hedge caught my eye,their outlines silhouetted against the dawn by the rays of light made me realise that they were a pair of donkeys.
For a Christian this might have been a deeply symbolic moment what with the time of year and all !.Instead my thoughts turned to the proximity of the towpath to the animals and reminded me of how once on certain canals these donkeys would have lived a very different life.
No such romantic thoughts would have passed through Captain Randle’s mind when he left London on board the fly boat ‘Stourport’ in the early hours of an August day in 1858. Instead I feel sure that he would have been preoccupied with thoughts of the unusual cargo he was carrying and although he didn’t know it, Captain Randle was about to make a little bit of Canal history.
For the ‘Stourport’  belonging to the Grand Junction Canal Carrying Co was that morning carrying, apart from the usual various boxes, barrels and packets destined for various up-country wharfs, a journalist and his friend together with a large meat pie brought along for sustenance on their journey to Birmingham.
John Hollingshead was a freelance journalist writing for Charles Dicken’s topical magazine ‘Household Words’. This magazine had been founded by Dickens in 1850 who used it to express his social concerns. Priced at only 2d it was nevertheless aimed at concentrating the minds of a predominantly middle class audience towards the  evils of poverty,working class housing and (with the River Thames at that time an open sewer) the sanitation of the metropolis. To popularize the magazine Dickens found he had to include more popular subjects such as travel and in particular serialized fiction. Some of his first novels and those of Wilkie Collins first saw the light of day here.
Hollingshead had previously written on the state of the gipsy population and had lived with and reported on the railway navvy gangs before now turning his attention to Britain’s floating population on the canals. 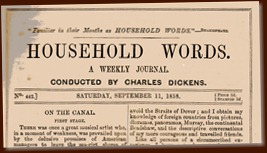 That Holingshead wrote this article at this particular time is a fact that all succeeding generations of canal lovers, historians and in particular students of popular British Folk Art have reason to be grateful for because it is generally recognized to be the first detailed written account of canal boat life in the UK. The boaters and their life,dress,food,social habits as well as a description of the boat are all given in some detail. Although it has to be remembered that this was a fly boat with an all male crew of 4 travelling night and day that is being described and not a ‘family boat’.
‘The Stourport is rather faded in its decorations,and is not a gay specimen of the fly-barge in all its glory of cabin paint and varnish; but still enough remains to show what it was in its younger days,and what will be again when it gets a week in dock for repairs in Birmingham. The boatman lavishes all his taste; all his rude,uncultivated love for the fine arts upon the external and internal ornaments of his floating home. His chosen colours are red,yellow and blue; ………….The two sides of the cabin,seen from the bank and the towing path, present a couple of landscapes in which there is a  lake,a castle,a sailing boat and a range of mountains painted after the style of the great teaboard style of art.
It is the underlined portion of the above quote from the article that has excited the most interest over the years as it is as far as is known the very first indication of the existence of the now famous ‘rose and castle’ decoration on the boats. What a pity that this article like all the others in the magazine was unillustrated. We have to wait until 1873 for this.
Hollingshead goes on to describe the painted water can and amongst other topics he gives details of – the boaters clothing and habits,diet,living quarters and possessions are all described in some detail. The journey and people encountered are discussed and most illuminating of all, some brief chats with the boaters are given.
The article takes up some 17 pages spread over 3 consecutive issues – those for 11th Sept, 18th Sept and 25th Sept 1858.
Hollingshead’s article like all those in ‘Household Words’ is unattributed and we would not have known of his authorship but for the fact that a paybook has survived listing all contributors and their articles.
The author went on to theatre management and became quite a famous music hall promoter and manager bringing Gilbert & Sullivan together for the first time and presenting their first operetta.
If you want to read the whole article – the Waterways Museum brought out a copy in thin card covers in 1973. Otherwise the Dickens Journals Online has down loaded the whole of the 9 years of production of the mag and you should be able to sort out the relevant issues. Try http://www.archive.org/details/djo . Go to Vol 18 and the start pages are 289,318 & 354.
Posted by Unknown at 05:28 2 comments:

One of the best films ever? DVD Review. 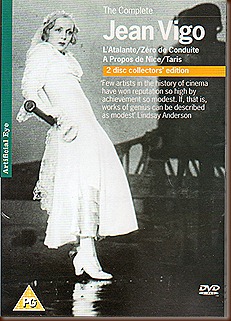 With the cut iced over for days now and Christmas fast approaching my thoughts turned to an old movie shot during the winter months on the canals of Paris over 70 years ago.It might make an unusual gift for someone this Xmas.So this time not a book but a DVD containing the film L'Atalante for review.

I will say straight away – If you don’t like world Cinema , French Films, Art House films, subtitled films, very old films  or films that do not have a strong story line then forget about this blog and look at another one instead !
However if you are interested in acquiring a copy of the film that came third in the Guardians list of best ever Art House & Drama films then read on.
For non film buffs you may just like the shots of peniche's working on the canals of Paris in the early 1930;s.

The story is a very loose one and concerns a French barge skipper and his new wife and the trials and tribulations of married life in the confines of a peniches cabin. Wife runs away – husband sets out to win her back from the streets of depression era Paris and the characters she has met in her flight.
L'Atalante was shot in the Bassin de la Villette and the Canal de St Martin and the street scenes – in and around Paris. The result  is a film of tremendous beauty and poetry . It’s a Romantic film and so for me any way the story is not important. It is above all an artistic film painted with a camera rather than a brush.
The movie Is an artistic collaboration between the director Vigo and the cinephotographer who was a renowned expert and who went on to shoot ‘On the Waterfront’ with Marlon Brando. The film is full of eccentric characters performing in ordinary working class locations and is beautiful in its simplicity.
I guess you will either love it or be distinctly underwhelmed and wonder what all the fuss is about.
Many others have loved this film over the years and it has regularly featured in Top 100 movie lists e.g it came 6th in ‘Sight & Sounds’ 1992 Greatest films of all time poll.
The film was made in 1934 by Jean Vigo who only ever made 4 films and died aged just 29 just as this his greatest film was released.
For those interested, greater details of his life and work can be found at http://www.bbc.co.uk/films/2005/04/14/l_atalante_2005_review.shtml. or try www.guardian.co.uk/film and search for jean vigo.
The ‘Artificial Eye’ DVD shown in the picture contains documentaries, biographies and the 3 other films that he made. I have had my copy for some time and so I was amazed at the price being asked for it now. However it is available cheaply as a video or the DVD can be rented.
Posted by Unknown at 04:43 1 comment: