‘Illustrated Magazine’ was published throughout the 1940s /50s and was along with its great rival – ‘Picture Post’ a  very popular source of news and current affairs.
Of the three articles concerning Britain's canals in wartime published in these two magazines; the ‘Illustrated Mag’ shown above has a very early entry which might interest those interested in the origins of the ‘Idle Women’ and the wartime boat training scheme on the Grand Union. 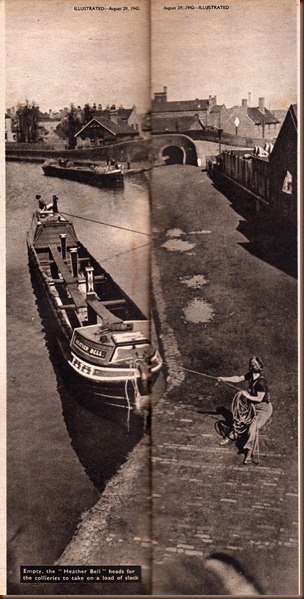 Caption reads - ‘Empty; the – ‘Heather Bell’  heads for the collieries to take on a load of coal’.
The March family from Worcestershire had owned the ‘Heather Bell’ for some years before war broke out in 1939 when they decided to help the war effort by carrying with the boat. The photograph shows Daphne March (Daughter) and a crew member with the boat at Tipton.. Initially Daphne’s elder brother was involved with the running of the boat but after he entered the armed forces Daphne and her mother ran the boat alone.
The boat carried coal from the Birmingham area for delivery to canal side premises in Worcester with a return trip with flour to Tipton. Occasional trips were made elsewhere. 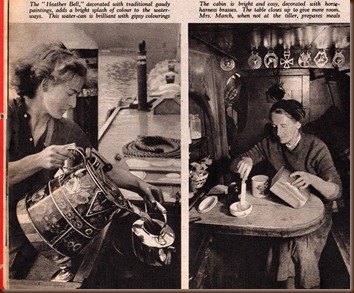 L T C Rolt living on his boat ‘Cressy’ at Tardebigge on the Worcester & Birmingham canal during the war years would have known this boat and its crew well. He mentions  a boat passing him in the dusk and the ‘Roedean’ accents of the female crew members  floating back to him as the boat passed by.
The boat started its run to Tipton in February of 1941 but after her brother left to enter the armed forces Daphne advertised in the Times for a new crew member. Molly Trail joined the boat and she in turn introduced Kit Gayford as a crew member.Molly left in the autumn of 1941 but Kit Gayford stayed on until the boat sank in an accident in December of that year
After leaving the Heather Bell, Molly Trail was one of those involved in planning the wartime female boat training scheme for the GUCC and the Ministry of War Transport and in the summer of 1942 Kit Gayford joined her and they both started training the women who applied to join the scheme.
The March family were thus early forerunners of the all women wartime crews  although it should be said that it was not unknown,from early times on, for a wife (after the death of her husband) to steer the family boat perhaps with the help of a daughter.
The subject of Daphne March,the ‘Heather Bell’ and the ‘Idle Women’ boat training scheme is dealt with in much more detail in a great item by Mike Constable in a current article in the Historic Narrow Boat Owners Club newsletter. http://www.hnboc.org.uk . Mike has researched this subject very thoroughly and is able to deal with it in some detail. 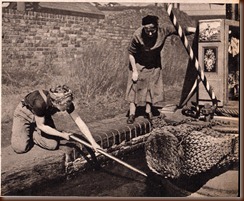 Daphne March and her mother.

Daphne features in another wartime publication which I will review shortly.
Posted by Unknown at 05:49 No comments: 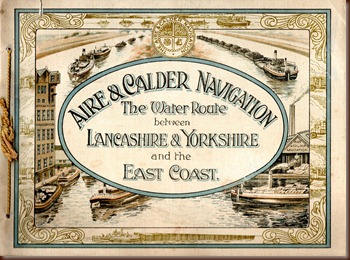 The larger canal companies occasionally issued promotional material and the booklet shown above is one of the earliest  in my collection. 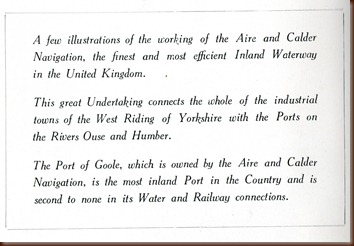 With its colour printed front cover and tasselled cord binding it looks  quite prestigious and was obviously designed by the Aire and Calder Navigation Co to impress potential customers with the size of their canal and its state of the art equipment. 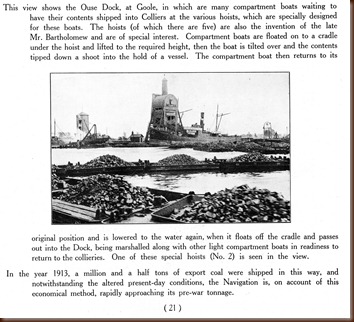 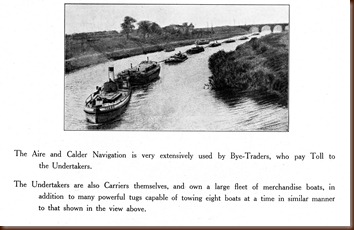 As are their tugs and carrying craft. 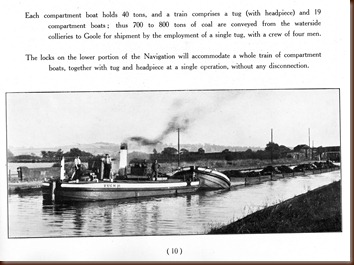 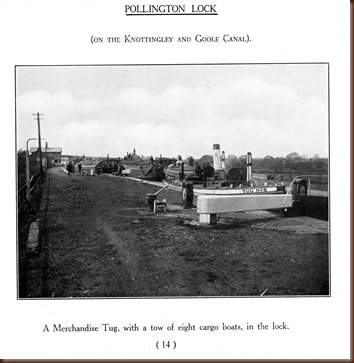 The  undated booklet has 30 pages and 20 plus photos and diagrams and seems to have been issued in the early 1920’s.

A Day Out at Compton Verney & British Canal Art (and other things). 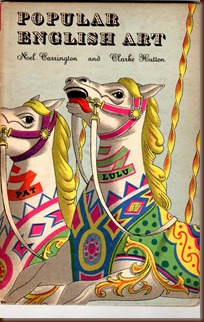 I have written in a previous blog of the first recorded mention of the painting and decoration of the English canal  narrow boat (see my Dec 2110 blog – On the Canals in 1858). This was unfortunately just a written description and as vivid and detailed as it is, another 15 years passed before we have our first visual idea of this painting in an engraving by H R Robertson in ‘ Life on the Upper Thames’  published in 1873. I will be showing this and some of the other superb engravings from this book in a future blog.

My purpose here is to take the story on from this point and although we have various mentions of ‘ the gaily painted barge decoration’  and ‘ the decorated pails and buckets’  in various accounts of canal voyages made during the subsequent half century it is not until the years of the second world war and after that the boat decoration is recognized as forming part of a much wider British Folk Art tradition.

Noel Carrington's book was the first to include Canal Boat Art in his book of British folk art in 1946. Carrington was the brother of Dora Carrington the artist of Bloomsbury & Lytton Strachey fame. Before WW2 he had edited Country Life before becoming involved with Penguin Books at the outset of their publication in the late 1930’s.

Carrington introduced a series called King Penguins during the war and their colour printed board covers as in ‘British Popular Art ‘ were often designed by Clarke Hutton. 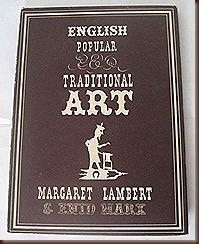 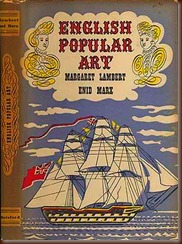 Margaret Lambert a historian and Enid Marx an artist designer are generally credited with recognizing and initiating an  interest in Canal boat art in particular  and British naive art in general. Since the early 1930’s they had amassed a huge collection of paintings and artefacts from all over the country. Nothing escaped their eyes – fabrics,inn & shop signs,fairground items, corn dollies, cig cards , metalwork and ephemera off all kinds – all found a place in their collection.

This collection  is now housed at Compton Verney in the Warwickshire Countryside and a visit there is a really good day out where you can see amongst the Measham Teapots and Old Canal Art, many other strange and wonderful things and yes they do have a cafe. http://www.comptonverney.org.uk/collections/british_folk_art.aspx.

Enid Marx was a fellow student of Eric Ravelious who in turn taught John O’Connor (see my Jan Post) and its noteworthy that all these artists had an interest in ordinary, very humble and yet quirky subjects and artefacts as indeed did Barbara Jones…..

Barbara Jones’s work ‘The Unsophisticated Arts’  was published in 1951. 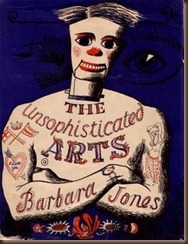 My favourite and probably the most scholarly and yet quirky of all the books mentioned in this article is this lovely book which emanated from a series of articles in the Architectural Review published throughout the 1940’s. This review deserves a separate article of its own since it played an unacknowledged role in bringing together  and publishing for the first time articles,art & photographs by young artists and designers such as Barbara Jones & Eric De Mare. In a future article I hope to show some of these early articles which were the precursors of mature works such as ‘Unsophisticated Arts’ and ‘The Canals of England’.

Barbara Jones was interested in all things odd,unacknowledged and quirky – follies,fairgrounds,shop signs,grottoes and all forms of popular art. She helped to organize the 1951 Festival of Britain and the ‘Black Eyes & Lemonade’ exhibition at the Whitechapel Art Gallery in the same year, one of the first exhibitions of popular art to be seen in this country. One of her book jacket designs will be familiar to some and I show this below. 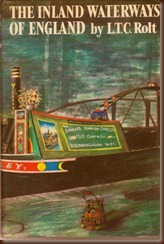 The ‘Salvo’ and Reginald Mills. 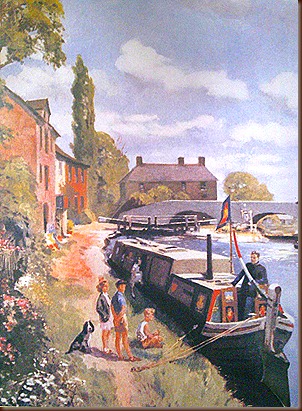 Canal book ,ephemera and print collectors may be interested in this print from my collection which I recently ‘rediscovered’.

No prizes for guessing the location although ‘artistic license’ and a touch of the ‘Enid Blyton’s’ reigns supreme in the bottom left foreground I feel.!!

Still its an unusual subject and one which many people although they may know the location will not know the boat tied up near to what is now the Canal Museum at Stoke Bruerne,

The original painting is in the archives of the Salvation Army and this will immediately give a clue to the boats identity especially to canal buffs of a certain age.

I have no idea whether the artist Reginald Mills was a Salvationist or not but I have seen another work of his portraying the Salvation Army in a town centre so he could well have been. As a painter he was active in the 1930 – 50’s period and is very well known for his paintings of the London Blitz .

The boat is of course the ‘Salvo’ with Brigadier Fielding standing in the hatches. The Fielding's ran a mission to the boat people on the Grand Union Canal from 1950 – 1964 and the painting I would think dates from the early 1950’s. Brigadier Fielding had known the boat people from an early age as his parents ran a general store patronised by the boaters at New Bradwell.

Like many I can remember the Fielding's in retirement at their cottage on the offside at Norton Junction. B W had awarded the couple the cottage rent free as an acknowledgment of the couples service to the canal boatpeople.