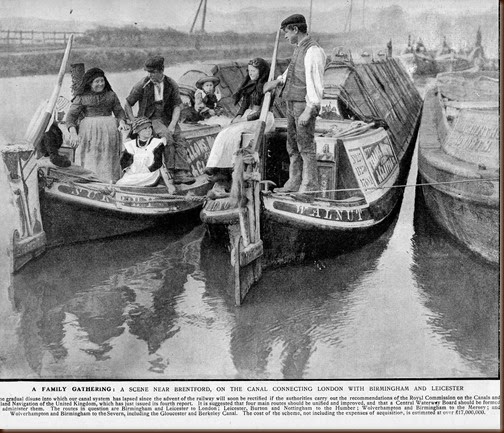 Well we all like a good photograph of Narrow Boats and preferably a detailed study of loaded working boats taken in ‘the good old days’. The photo above I think fits the bill admirably and shows Fellow's Morton Boats tied up at Brentford. Obviously posed for the camera the study was used to illustrate a ‘Graphic’ magazine article on ‘Our Neglected Waterways’ published at the time of the Royal Commission’s report on our Canal transport system.

So having wetted your appetites and suitably wallowed in nostalgia  I have to disappoint you and say that the only thing that this photograph has in common with the rest of this blog’s contents is its date of publication – 1910. There is always the distinct possibility of course that you are fed up with the endless lines of moored boats,of queuing for locks and the sometimes theme park atmosphere that characterises our waterways today and you may long for a quieter time and a less frenetic age.  If so read on… this blog could be for you. 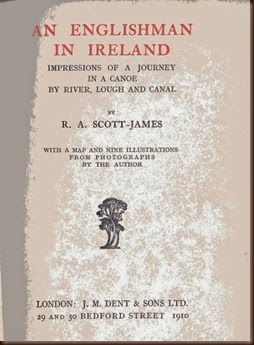 Totally forgotten today Scott James was at the turn of the Twentieth century a very well known journalist, author and literary critic. In the 1930’s he took over the editorship of the influential literary magazine ‘The London Mercury’ from J C Squire who is today similarly forgotten but who’s name I mention only for the fact that he was the author of another early British canal cruising classic ‘Water Music’  published in 1939 – a book of reminiscences of a journey up the Oxford Canal & others. His companion on this journey was the indefatigable canal cruiser William Bliss whose own book ;The Heart of England by Waterway’  was published in 1933.

I mention these names from the past as they all had one thing in common  in that they all accomplished their voyages by canoe. Their voyages followed in a long tradition, starting in Victorian times , of middle class , university educated Victorian & Edwardian gentlemen’s explorations of this countries waterway system resulting in published accounts. 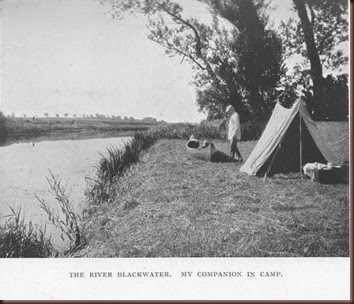 R A Scott James was different from the rest in that he chose to voyage over Irish waterways. Ireland has few accounts of canal voyages – the most notable earlier accounts are I suppose L T C Rolt's ‘ Green & Silver’  P’bd in 1949 and Hugh Malet’s ‘Voyage in a Bowler Hat’ p’bd in 1960. Apart from these one has to go back to the early 1830’s when accounts of voyages on Irish packet boats survive.

So Scott James voyage is as far as I know unique both in its timing and certainly in its choice of waterways.

The author chose to travel across Ireland from east to west via the Lagan navigation, Lough Neagh, the Ulster canal and Lough Allen to the Shannon & Limerick. This interconnected route was at the time of the authors trip the third cross country route after the Grand & Royal canal route’s. Setting out from Belfast the author & companion canoed up the Lagan canal which was at that time commercially very busy and he records interesting conversations with the working boat population. For contemporary readers probably one of the most interesting bits of the book is his account of the voyage through the Ulster canal with its 26 locks which at that time was virtually defunct (he passed only 1 boat in 3 days) and the canal was finally abandoned in 1926. 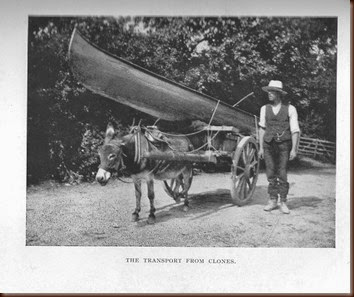 On entering the Ulster Canal they immediately found it to be narrow & weedy and eventually after a few days impassable . The next stage was accomplished by loading the boat onto a carriers cart for transport to a railway station. Again for contemporary readers the next stage provides fascinating reading as the boat was loaded onto the last of Eire’s (by this time) narrow gauge railways for onward transport to Lough Neagh, the Shannon & eventually Limerick. 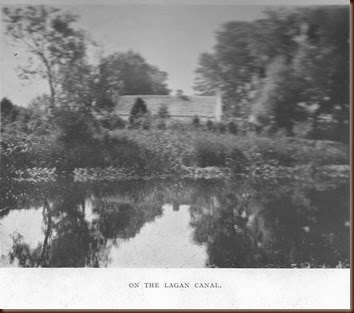 Note…. Both the Lagan and Ulster Canal’s are today subject to joint cross border restoration  projects and part of the Cavan & Leitrim light Railway has been reopened.