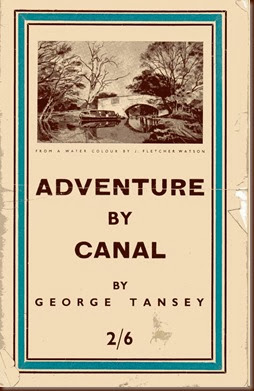 I had known about George Tansey’s book for many years but had never actually seen a copy until recently. Its rarity can I think be explained by its ephemeral nature, it being a thin copy printed on poor quality austerity paper & with easily damaged paper covers.

Privately printed from articles previously printed in the ‘Daily Dispatch’  it describes a journey on the first hire boat to be converted from an ex working Narrow Boat after the war at one of the first hire companys bases at Stone in Staffs. The boat was the’Angela’ and was named after Tom Rolt’s wife who in fact wrote the introduction to the book. Rendel Wyatt the boatyard owner had started his hire fleet in 1948 which  was I think the first ever hire fleet on an English Canal. Wyatt an early member of the newly formed Inland Waterways Association became friendly with Tom Rolt one of the founders and indeed it was to his yard that Tom Rolt took ‘Cressy’ on its last voyage. It was a bad time for Rolt as he had fallen out with the organization that he had helped to form – the IWA, in addition his marriage was breaking up and on top of that his beloved boat on which he had lived for 10 years was rotting away beneath him. So it was a sombre and disillusioned man who steered Cressy to Stone in 1951 where she was to be broken up. 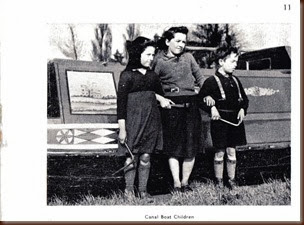 Photo illustration from ‘Adventure by Canal’

The book has 26 pages and is illustrated with fascinating shots of the voyage around the Trent & Mersey & Shropshire Union Canals with photos of working boats encountered etc.

The fascinating thing about the copy that I bought was that it seems to have been acquired at the First National Rally of Boats organized by the IWA in 1950. The book has an owners signature which was signed at the rally and presumably bought there.

Tom Rolt had been disagreeing over the aims of the organization with Robert Aickman the other co founder of the IWA for some time and things had come to a head in 1950 with the organization of this first national rally. Aickman an aesthete wanted the rally to be ‘A festival of Arts & Boats’ and to this end was organizing the presentation of a couple of plays to be performed. Rolt strongly disagreed with this and relations between the two men disintegrated to the extent that Rolt was requested not to attend with his boat.

On opening the book which I hadn’t known was signed at the Rally I was surprised to find a couple of enclosures!! 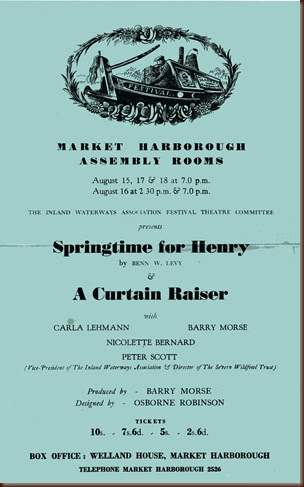 Handbill for plays produced at the 1950 Rally of Boats.

An amazing survival and an advertisement for the plays that had caused all the trouble!! The cartouche heading the playbill is by Barbara Jones of ‘Roses & Castles in the Architectural Review & The Unsophisticated Arts’ fame. I think I would have recognized her work but a pencilled note on the back of the bill confirms this.

But this was not all. 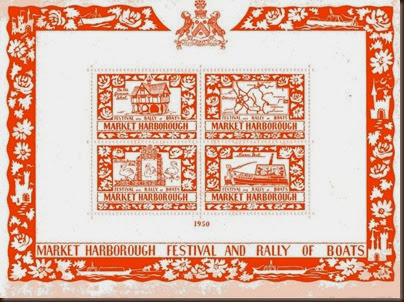 A set of unused stamps issued for the rally.

A set of 4 stamps complete with perforations and gummed back but unused and with a decorative border were obviously issued at the Rally. But what for??  I have no idea. I have never seen or heard of this item before so if anyone knows anything at all about it PLEASE LEAVE A COMMENT.

So there we have it –A Rare little book with some interesting & historical enclosures which in themselves must be quite rare and which have done well to have survived this long in such perfect condition.

If you look for and find a copy of George Tansy’s rare publication snap it up as you may not see it again and I hope you may have the same luck with ‘Ephemeral enclosures’.