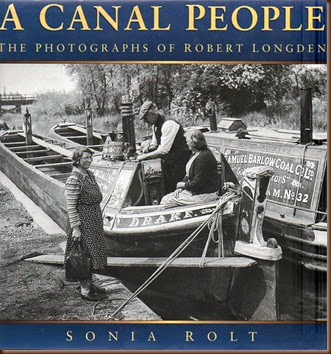 Sonia Rolt one of the last surviving members of the group of wartime young women recruits to the Grand Union Canal Carrying Co’s fleet has passed on at the ripe old age of 95.

She will be remembered not only as the wife of Tom Rolt the author of the landmark book ‘Narrow Boat’ but as a pioneering campaigner for working boaters conditions and for the English canal system in her own right.

As the author of ‘A Canal People’ published in 1997 she has left us with what are generally agreed to be some of the best photographs ever taken of the working boat community. From her time on the boats just after  the war she remembered Robert Longden’s quiet  presence on the canal side always with his Leica camera in hand. The boat people became familiar with his appearances on the cut side in the late 1940’s & early 1950’s and the results were some delightfully informal pictures of a normally shy and unassuming community.

Twenty Five years later Sonia Rolt went in search of Longden who had by that time died and discovered that his camera and photographs had been destroyed on his death. Fortunately however a box in a garden shed was discovered containing glass plate negatives. From these Sonia published the book ;A Canal People’' If you have not read it then beg ,borrow or buy a copy – you wont be sorry.