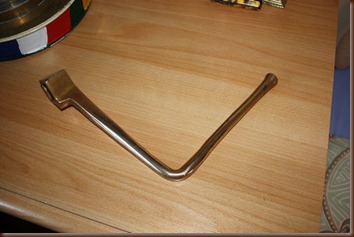 You might consider cashing your old windlass in if your short of a few bob as rare collectable windlass’s have been achieving some surprising auction prices on EBay recently. The ones to look out for are all single eye with the mark of a canal carrying company eg FMC or canal company eg GJC. Also highly prized are the windlass’s that were produced by canal side blacksmiths eg Neale or Cooke who worked alongside the cut at Wheelock (T&M canal). 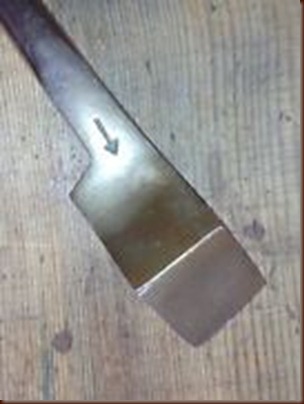 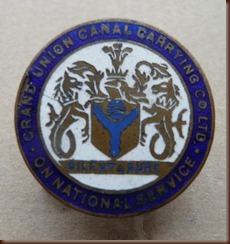 Very rare and seldom seen, this enamelled badge was given to the employees of the Grand Union Canal Co during the war. They were all individually numbered (This one No22) and reads ‘Grand Union Canal Carrying Co Ltd, On National Service). 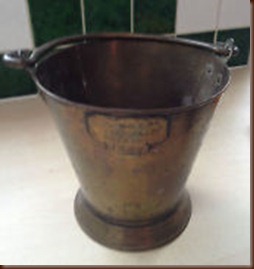 Another rare survivor this bucket is inscribed ‘F M C & Co. CANAL NAV’n.OLDBURY. 1921. I certainly have never seen its like before and it could possibly be unique. 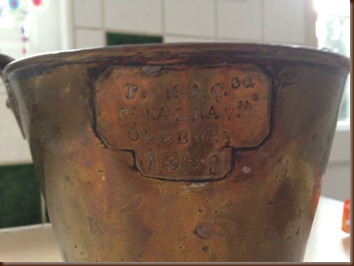 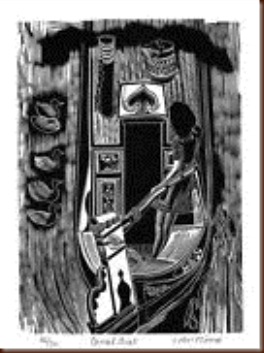 This lovely period print was good value at £36. John O’Connor is famed in  art circles for his unique wood engravings & in the canal book collecting world for his unique book  Canals Barges & People published in 1950. O’Connor visited the old Fellows Morton & Clayton dry dock at Uxbridge and fell in love with the people and boats of the cut, He included many of his engravings in the book in black & white and in conjunction with overprinting with lino cuts, – in colour, a revolutionary technique at the time. Because of the difficulties that the printers had in producing this book it was issued in an edition of only 1,000 which because of its appeal to both the art & canal worlds means that it is now a highly prized book commonly fetching  £100 and more. The print above was one of several that did not appear in the book and was printed later in the 1960’s. Look out for these as they can only increase in value. The book too is worth acquiring for both its art work and its intimate descriptions of the canal folk and their world. Prose that could only have been produced from personal experience. 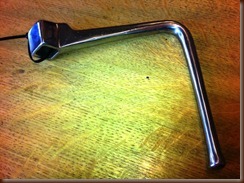 Finally a totally unique windlass changed hands recently for what must be a record price of £236. The windlass in question came from Ernie Thomas the well known BCN canal carrier. I feel privileged to be able to remember seeing one of his horse drawn boats in action in the 1960’s. Ernie was in the habit of having Windlass’s chrome plated and presenting them to friends and acquaintances. This one was presented to the landlord of the Boat Inn at Gnosall and lived over the bar for many years.   It is inscribed ‘To Stan Marshall with the compliments of Ernest Thomas of (Walsall) Ltd.’ 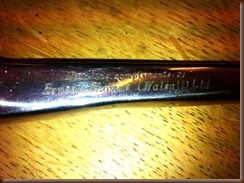