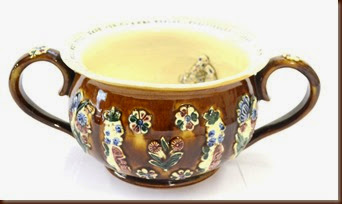 Rarer Measham (Bargeware) always achieves a good price amongst the dedicated collectors out there. This 1884 Chamber Pot  with the usual inscription ‘ Pick me up and use me well and what I see I will not tell’   inscribed around the rim and with entwined lizards inside the bowl  -  sold for £700. It has the owners name & ‘Swadlincote ‘on the usual cartouche. Nice canal connection there.!! 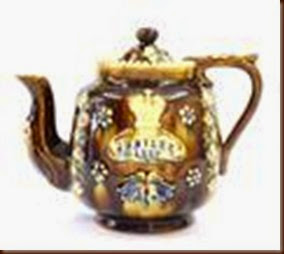 An ordinary ‘cottage single spout’ teapot is one of the commonest Measham items to appear at auction and can be bought for a lot less than £100. The pot shown above (apologies for picture quality) however is a rare example commemorating Queen Victoria's Golden Jubilee and is inscribed ‘ Jubilee 1887 & God Save the Queen’  - this fetched £320. 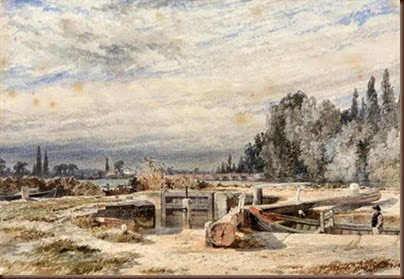 Henry Dawson (1811-78) is one of the better known artists with canals as a favourite subject for study. This early view is entitled ‘Trent Bridge from the Grantham Canal’  . Unfortunately the Trent Bridge can hardly be seen in the background and instead, and  of the greatest interest for modern viewers, the junction lock of the Grantham Canal with the Trent is shown with some detail. An estimated guide price of £200 - £300 was given for this lot . There are very keen collectors of early canal/waterway subjects around. 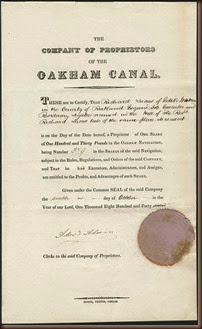 This  was one of the more unusual canal shares to be sold recently – It dates from 1847 and fetched £90. 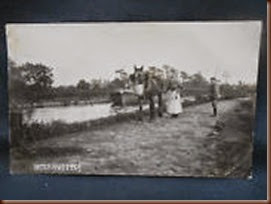 Another collecting area where deep pockets are required are early Canal view Post Cards. Good early cards rarely appear now and this view (sorry about my reproduction)  shows a close up of canal boatwoman and horse on the Leeds & Liverpool C . Superb but plenty of interest and a final price of £96 . 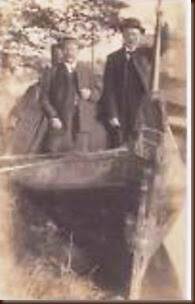 On the other hand this view of two Edwardians standing in the stern end of an unidentified butty didn’t attract much interest selling for a fiver. 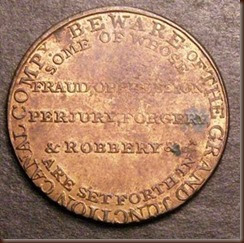 Canal & waterway tokens,badges & medals appear regularly in the salerooms and the rarer items excite some interest. Such was the case with this Cove token of the early 19th C.

Augustus Cove was a London dealer in china and glass who had a lease on a canal side wharf in Paddington Basin. He seems to have fallen out with the Grand Junction Canal Co and perceived himself to have been the victim of a great injustice. The chip on Cove’s shoulder weighed so heavily that he published a booklet of 185 pages (and in at least 2 editions) To publicize his booklet Cove also issued this token which bears the legend ‘ Beware of the Grand Junction Canal Comp.y some of whose fraud, oppression, perjury, forgery & robbery & Ca, are set forth in … and on the tokens reverse…’ Augustus Cove’s publications entitled ‘The Tocsin Sounded or The Bull taken by the Horns &c to be had of the booksellers’. This rare token had a guide price of £150. 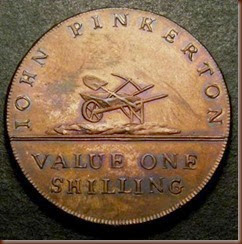 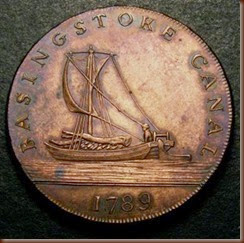 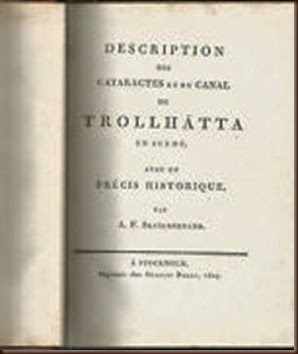 This leather bound  copy of ‘Descriptions des Cataractes et du Canal Trollhatta’  in French was published in Sweden in 1804. A rare book containing 11 aquatints and a map of the locks at Trollhattan  was a bargain at £90.

Another recent bargain was an 1831 first edition copy of Priestley in original boards which fetched £70. 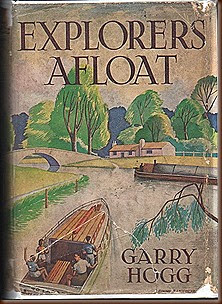 All collectors of Children’s canal books will know of the incredible scarcity of Garry Hoggs book. A First Edition copy(1940) with only a photocopied Dust Wrapper recently sold for £125.  It is an important & pivotal book which I dealt with in my first ever post in 2010 see ‘Oodles of Ice Cream & Fizzy Pop’ . Why it should be so rare is a mystery but I suspect that it may have to do with the outbreak of war and printing restrictions although a second edition in 1952 is equally elusive. If you are lucky enough to stumble across it then you can count your lucky day!!! 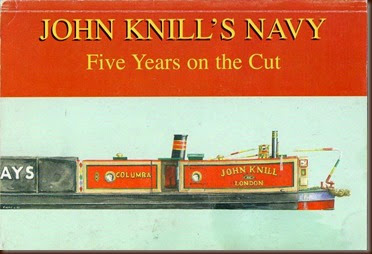 Finally you may have seen my recent post on John Knill’s book but in case you didn’t I can report that it sold for £35 which is a tidy sum for a paperback printed only a few short years ago.Try and find one now!!!

Last but not least some early photographs on Ebay at the present time may find some interest. 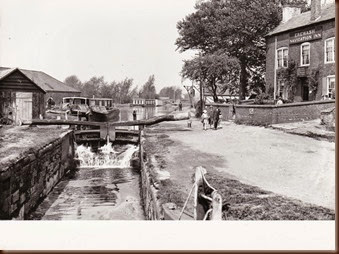 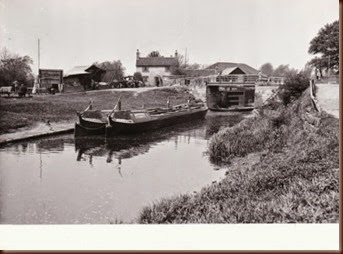 Eleven photographs taken around the junction of the Erewash canal with the River Trent circa early 1920’s. 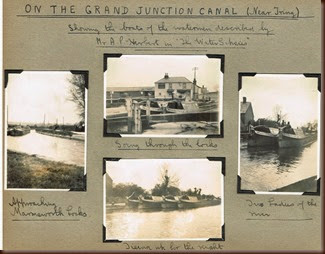 Four photographs of the Grand Junction canal around the 3 locks (Stoke Hammond area) circa 1930’s.