In the footsteps of ‘Bliss’–(A recent find).

One of the unexpected pleasures in collecting and dealing in old canal books is the occasional chance find that turns up to surprise and delight. One such find occurred recently in a collection of old canal books bought at Auction. In a copy of ‘The Heart of England by Waterway’  by William Bliss published in 1934 (See my 2010 blog ‘ A forgotten book from the 1930’s ) I found a boaters log from 1938 stuck in the back of the book. It consisted of 6 pages of note paper which detailed a trip from Braunston down the Oxford Canal & onto the Thames. 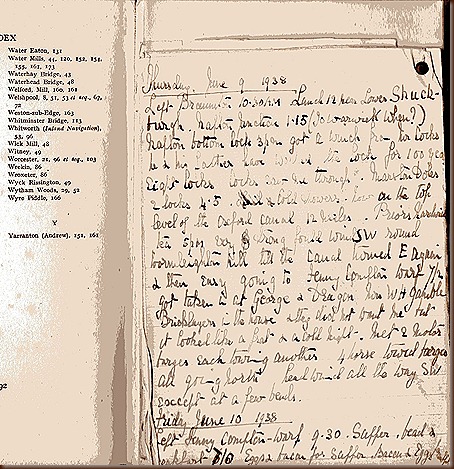 The canoe trip took place over the course of a week in June 1938.

The author is very much preoccupied by wind direction being a canoeist so distances and times taken to travel are detailed meticulously. The author left Braunston at 10.30am and arrived at Napton at 3pm where he was supplied with a ‘winch’ by the lock keeper who told him that he and his father before him had worked the lock for a total of 100years.

At Fenny Compton Supper,Bed and Breakfast at the George & Dragon cost 7/- and consisted of eggs & bacon for supper and bacon & eggs for breakfast ! Pub menus in those days were obviously not famed for their diversity of choice.

At Weir Lock he was asked to produce his pass for the first time and at Somerton Deep lock he had trouble getting his boat out of the empty lock and had to ask for the lockies assistance. Arriving at Dukes lock he found it locked as it was a Sunday but the ‘very officious’ lock keeper let him through. In the Duke’s cut he went the wrong way – going down the mill leat but finally arrived on the Thames proper at Kings lock. Here he disembarked travelled to Cricklade by road and attempted to canoe downstream to Lechlade . The weather being hot and the river shallow he seems to have spent more time out of the canoe dragging it over shallows than he did in it.

Having detoured up the Evenlode he eventually reached Oxford where he sampled the delights of the Cherwell as far as Islip Mill.

The author of this log had followed routes described in Bliss’s book almost exactly. The final tally was Braunston – Oxford 61 miles,Cricklade Oxford – 43 miles & Oxford – Islip & back 15 miles. Charges for the Oxford canal came to £0 – 13 – 9 pence.

Incidentally I notice that a copy of this book fetched £100 on EBay recently.

MAY I WISH ALL MY READERS A VERY HAPPY CHRISTMAS.

What a great find - I would have got excited too! Have a great Christmas. Andy